Guest Blog Post: The Joys of Running and Where it has Taken Me by Peter McCluskey

Posted on February 2, 2017 by drcindylewis

I like running.  I guess that’s as good a way as any to start off a column about running.  Maybe, I hate running, would be more of an eyeball catcher, but that wouldn’t be true.  I’ve always liked running it’s something free and natural – and these days I find it liberating, wonderful, transcendental.  I also like travelling – especially to out of the way places. Over the years I’ve met interesting people, made good friends and visited wonderful places, so Cindy asked me if I would write a guest column for her blog about my experiences running in different countries.  I said “Sure.”

Running is its own reward certainly but it is also a ticket to visit other places, people and cultures.  While training for my first half marathon I met a young woman from Switzerland who was doing a nursing degree in Toronto.  After finishing her courses she was going to work in Phnom Penh, Cambodia and was also planning on running the Phnom Penh marathon.  She said she could always find a race wherever she went and that set off my curiosity and I wondered if I could incorporate runs into my travels as well.

Ottawa was my first destination race.  Just a few hours away but the race was going to take the runners through some parts of the capital I had never visited and across the river into Gatineau.  I went with a group of friends and I spent a few extra days there before and after the race, had lunch with friends, visited museums and reacquainted myself with the city.  It was great.

The next year I was heading to Berlin for a celebration of running that I think is unsurpassed.  The marathon has 40,000 runners and a million spectators.  Running down Yorckstrasse at 10 in the morning you’re serenaded by a full jazz orchestra while Berliners lean against chest-high tables on the street sipping their first (?) beer of the day.  I heard Latin drummers, a Turkish rock band, and a woman doing an impression of Edith Piaf.  In Buenos Aires they had tango dancers and ABBA impersonators – but both women were dressed like the blonde singer! They had water and fruit at the finish line but they also handed out tickets for a free choripan (chorizo sausage on a bun).  The friends I went with went back to plead for a second ticket.  Warsaw had the best tasting sports drink – so good that I took a fresh bottle at every station.  I’m sure my time reflected my oversaturated state.  Oh, and before I forget Berlin had a beer-tasting station (Yes, I stopped) and one nutrition station that served hot tea!

In Sofia, Bulgaria they handed out lemon wedges instead of orange slices.  And they were magnificent.  It was like getting a little boost of rocket fuel.

And then there are the people.  I ran about 10 kilometres in Berlin with a guy I had never met but who lived about two blocks away from me in Toronto.  In Buenos Aires I counted people from every country in South America – and discovered that one group from Brazil even brought their own photographer.  In Bucharest I finished alongside an Australian nurse who had landed in the country the night before.  In Warsaw I passed a young woman in the last 200 metres and then saw her coming for me on the giant screen in the National Stadium – the people in the stadium started screaming and she beat me by less than a metre. 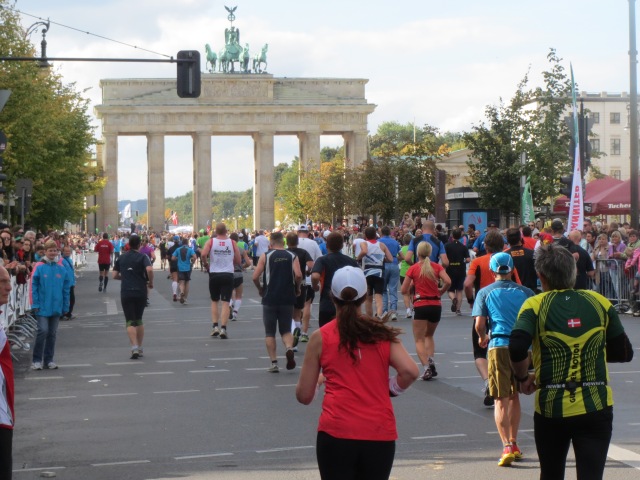 In Bulgaria runners had to have a doctor’s certificate. If they didn’t they needed to pay the equivalent of about $1.50 to have a medical student take their blood pressure.  One young woman came to pick up her bib and forgot her purse at the office so I paid for her test.  The course was six laps of a seven kilometre course – Alexandra had already finished but ran an extra lap just to keep me company on the last lap.

This year the plan is to do two marathons: Krakow, Poland in April and Berlin for the fifth time at the end of September.  I try to get to the location three or four days in advance to give myself time to acclimatize and so I have something resembling a regular sleep pattern, but really it just gives me time to look around and make my final post-race travel plans.  From Buenos Aires I travelled by bus to the Andes Mountains in the north.  From Berlin and Warsaw I’ve travelled all through Central Europe.  From Sofia and Bucharest I’ve made my way to the Carpathians, slept in monasteries and seen some of the most under visited tourist sites in Europe.  In Odessa, Ukraine I found a market that was so large it had one building just for dairy products and another for smoked meats.  I also discovered that not speaking Ukrainian was no barrier to buying a new pair of trousers or getting a haircut.  And I found a trail in northern Poland, right beside the Baltic Sea that runs forever and connects three cities.

No matter where you go you’ll find kind, friendly people.  Some races have a homemade feel to them, some are so well organized it makes your head spin.  Wherever you happen to be you’ll have fun and come back with some interesting stories.  Like the one about the naked women …..

This entry was posted in Uncategorized. Bookmark the permalink.