Everyone has a different experience being pregnant.  For some, it’s not safe to exercise and they need bed rest.  Others have extreme morning sickness (or all day sickness!) and really can’t do much at all.  Others, me included, may be able to continue some version of their pre-pregnancy physical activity level.

When I was pregnant with my first daughter, I didn’t know until after the first trimester was over.  As a result, I was training as a professional triathlete, including spending a week in Florida with a group of other pro’s, training full time.  It’s true, I didn’t feel amazing at training camp – but I was still able to do it, and just figured I was getting older and my years as a pro were coming to an end as I was feeling a little more tired than I had in the past. 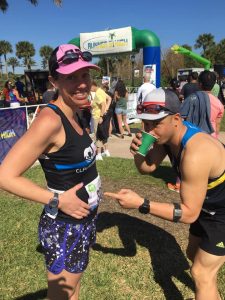 Because of this experience, when I found out I was pregnant this time around (and I was pretty sure about 2-3 days after conception!) I decided to continue training for the marathon I was aiming for, with modifications to my training plan based on how I felt each day.  Worse case would be that as we approached it, if things weren’t going well, I would just step down to a shorter distance event on race day and do what I could – walk, run or a combination thereof – to get to the end.

Once I knew I was building a baby, I was following a training plan that had me running 70-85km per week.  It included two specific interval or tempo runs, and three other runs to build volume.  I also had two strength training days and two days of cross training, which I have to admit I often did not do – electing to rest instead.

For the most part I got in 70% of those weeks of volume, but the intensity days didn’t always happen. If I wasn’t feeling good one day, I would move it a day forward.  The other 30% of the weeks may have started out okay, but at some point during the week there was a hiccup where my body just didn’t want to run. Often I would be lightheaded or just so heavy and fatigued. In these cases, I would listen to my body and skip it or cut it short.

This winter was very cold and slippery; so many runs were on the treadmill. That worked out okay because if I started to feel weak or light headed I could tone it down or stop – and not have to call for a ride home!

I started to really feel like I was pregnant in the last three or so weeks before race day. I was at about 15 weeks at that time, and starting to look like it. I felt heavy and tired and just achy!  Those weeks were not great for building confidence that I could run a marathon.  But still, I did my best to stay positive and continued trucking along the best I could.  One day would go well and the next wouldn’t, but I stuck to my plan of doing what I could.

I would be 18 weeks at the time of the race and I thought,”let’s just see what happens”. I planned to go slow, not stress out my body too much, and make sure both the baby and I got to end healthy and happy.  If necessary, I was ready to call it quits at any point during the race if I felt like it wasn’t safe to continue.

Race day came.  Waking up that morning I thought “Oh man, am I really going to do this?? Yes, I am!”  We drove to the race venue and got ourselves organized.  It was pitch dark as the race started at 6:00am.  When it was time to go, I started conservatively and just worked on finding my way through the dark path where it started without tripping over something or someone!

When your body starts to grow as you build a baby, your centre of gravity changes and you can feel less balanced.  It’s like re-learning every few days how your new body works!

I ran comfortably until about 25km and then started to feel more tired than I felt I should, and that running was a bit more of an effort than it should be.  At about 30km my back and hips realized they were carrying 15lbs more than they were used to, and

the newfound laxity in my ligaments showed up as a very stiff back and hips that became pretty sore over the next couple of kilometers.

I have to admit that a short time after that I considered asking a stranger along the way if they could give me a ride to the finish line!  Instead, I just did a bit of a walk/run and took it one mile at a time, while maintaining a good headspace.  I was not out here to win a race; I was out here to take on a different kind of challenge!  I texted my husband and told him what time I thought I would be done so he wouldn’t be worried about me, and then relaxed and did what I set out to do – get to the end with some version of running and walking.

We did it!! It was the slowest marathon I have ever done, including Ironman marathons, by about 45 minutes, but it was my best ever (and only) marathon done at 18 weeks pregnant!  I was happy to be at the finish line and I was happy to have done what I set out to do. (And happy for my husband, who had a great race!)

As I said in the beginning, this is not something for everyone.  Every pregnant woman should listen to their medical doctor and get advice on what exercise is safe for them and their baby.

From what I have researched, most times you are safe to continue doing something that you did before you got pregnant, with modifications based on how you feel. Those might include some drop in intensity to make sure you have enough blood going to your baby, and watching that your core temperature doesn’t get too high.  But I am not an expert on this so please get your own medical advice.  My goal here is to share my experience and motivate other women who are pregnant to continue some form of physical activity and do what makes them happy – provided they are clear to do so.  Going into the birth process feeling strong and healthy typically makes everything smoother during and after delivery.  And getting your body back post-partum is typically easier if you maintain the habit of exercise.

What are we (this baby and I) doing now?  Well, now we are half way to having baby #2 arrive and it’s time to stay fit in a more casual way, doing a variety of things.  I have been running 30-40 minutes when I feel like it, cycling and swimming casually, and have been focussing on being in the gym maintaining strength through weight training.  After my first daughter was born I had some issues recovering from a C-section and the muscle imbalances that came along with that afterwards. This time I hope to be more strength balanced going in to be in a better place to hit the ground running again afterwards!

Editor’s Note: Notice that Cindy’s approach included ‘HOW to keep going – not IF she would keep going! These kids will have to work to keep up with their Mom, but at least they have a running start.

This entry was posted in Uncategorized. Bookmark the permalink.